In the natural health community, adrenal fatigue is diagnosed by a set of specific symptoms and stages, but it’s often dismissed by the mainstream medical community. Like thyroid disease, the symptoms are very real to the people who have it but are all but invisible to others. As a result, adrenal fatigue has been labeled a myth or temporary depressive episode.

But when adrenal glands don’t make the correct amount or type of adrenal hormones at the correct time of day, you’re likely to struggle with fatigue.

The adrenal glands are two little triangular organs that sit on top of the kidneys. Though small, the adrenals are essential to regulating hormones like cortisol and adrenaline, modulating metabolic processes like converting fats and proteins into energy, preventing inflammation and regulating energy levels.

The modern lifestyle notoriously causes the adrenals to over-secrete these hormones for an extended period of time, which results in “fatigued” and overworked glands.

What is Adrenal Fatigue?

Without a proper balance between cortisol and DHEA (the hormone that balances cortisol), cortisol becomes a burden on the body. Over time, this can result in adrenal fatigue, accompanied by physical, mental and emotional symptoms.

Chronic stress takes its toll on the body in three typical stages:

Stage 1: Hyper-Cortisol. The first stage of adrenal fatigue is feeling wired, stressed, anxious and restless. While cortisol levels should be naturally elevated in the morning, this stage is often characterized by elevated cortisol at night.

Stage 2: Cortisol Dominant. The second stage is characterized as an accumulation of mild stress. Though people may have higher cortisol in the morning, it tends to fall in the afternoon, resulting in a sense of brain fog late in the day.

Stage 3: Hypo-Cortisol. The third stage is characterized by complete exhaustion—your adrenals can no longer produce enough cortisol to compensate for your stress.

Adrenal fatigue is usually diagnosed by an array of symptoms, but it can also be tested through blood work or salivary cortisol tests. Taken at four different times over the course of the day (a kit you take home), the saliva test is one of the best options for a more detailed survey of your adrenal function.

You may have adrenal fatigue if you experience any of these symptoms at various stages:

• You can’t sleep, or you can’t wake up
• You’ve got dark under-eye circles
• You’re having issues with your thyroid or your menstrual cycle
• You’re groggy in the afternoon
• You’re experiencing bloating and poor digestion
• You’ve got food cravings, especially for salt and sugar
• You’ve experienced decreased sex drive
• Your memory is reduced, or you have an inability to concentrate
• Your immunity is decreased, and you’re getting sick more often

While a modern lifestyle of poor sleep patterns, artificial light, heavily processed foods, environmental pollution and caffeine are factors that can lead to adrenal fatigue, prolonged stress is the primary culprit.

Adrenal fatigue exists in a gray area: the adrenal glands are, in fact, producing hormones, but the glands are weak due to elevated cortisol levels.

However, unlike adrenal fatigue, Addison’s disease, also called adrenal insufficiency, is an uncommon but accepted disorder in which cortisol and aldosterone levels are lower than in healthy people.

The two main classifications of adrenal disorders include primary and secondary adrenal insufficiency. The former is an illness of the adrenal glands themselves in which roughly 90 percent of the adrenal cortex has been destroyed.

The latter is much more common and develops when the pituitary gland—a pea-sized gland at the base of the brain—fails to produce enough adrenocorticotropin (ACTH), a hormone that stimulates the adrenal glands to produce cortisol. Eventually, the glands shrink due to a lack of ACTH stimulation.

Adrenal fatigue is also sometimes confused with Cushing’s syndrome, a disorder that occurs when your body makes too much cortisol over a long period of time. Although rare, the syndrome can cause heart attacks, blood clots, infections, high blood pressure, and type 2 diabetes.

Though adrenal fatigue also corresponds to hormone production patterns, these are distinct and severe conditions that require specific medical treatment as they can be fatal.

Does coffee cause adrenal fatigue? No. Does coffee likely add to the chronic stress issues in a survival-mode-driven person? Yes.

Caffeine stimulates neuron activity in the brain in which neurons send messages to the pituitary gland to stimulate your hormone-producing adrenals.

If your adrenal glands are fatigued, caffeine can cause them to overwork to make more cortisol.

This leads to diminishing responsiveness, which is why coffee, caffeine pills, and unhealthy energy drinks have less effect over time, particularly in people with adrenal fatigue.

Caffeine also prevents the neurotransmitter adenosine from telling your body that you’re tired. These artificial sources of energy enable chronic stress and further deplete the glands.

Instead, a lifestyle and diet that nourishes the body and minimizes stress are at the core of treating adrenal fatigue. 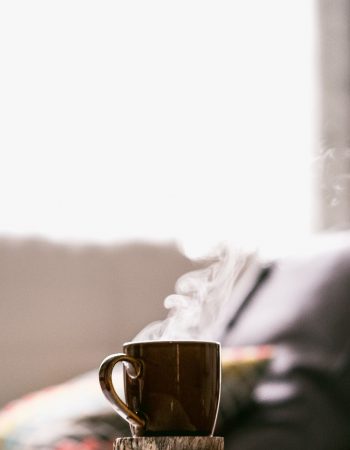 How to Treat Adrenal Fatigue

After a year of lying bedridden with Lyme disease, my entire body wasn’t working properly. I was having blood sugar attacks and was unable to process simple tasks in a state of brain fog.

I had taken almost every kind of antibiotic on the market—orally, intravenously and intramuscular injections. I was still sick.

I took a saliva test and learned my adrenal glands were functioning at a minimum level due to the chronic pain and suffering I had endured for an entire year, which prompted me to seek help from a naturopathic doctor and a nurse practitioner.

We worked to rebuild my adrenal glands with nourishing food, vitamins and minerals, as it should be said, treating adrenal fatigue is not a quick fix. It’s a lifestyle that combines improvements in many areas of life, including diet, stress management, and various therapies.

I recommend and continue to use these products as a form of adrenal management:

If you think you may be suffering from adrenal fatigue and are seeking answers, guidance, and reliable information, reach out here to discuss your symptoms or visit www.naturallywithtami.com for more information.